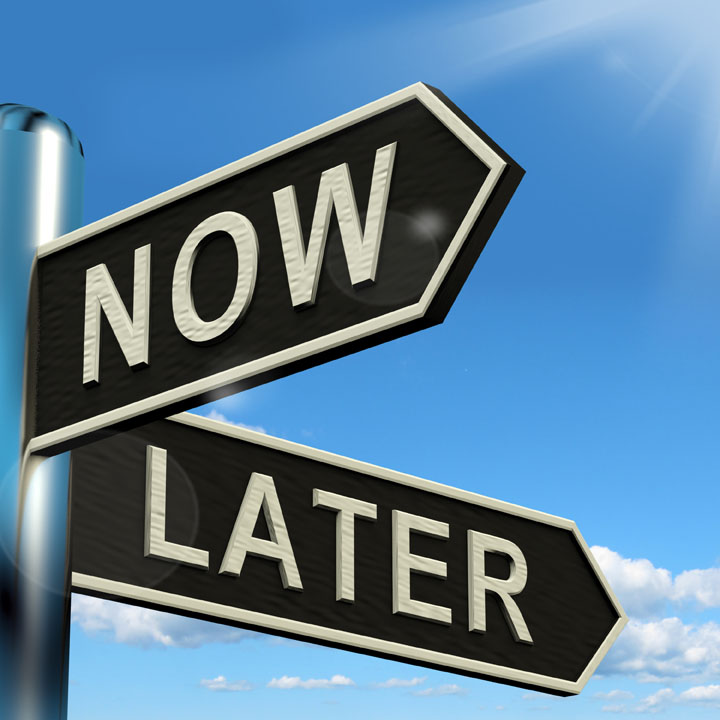 Think about that. The majority of people procrastinate at some point about something. And 25 percent of them are hardcore procrastinators.

So if you have a problem with putting off things–such as writing content for your business–until the last minute, you are not alone.

Many people have written on the topic. I personally like essays written by procrastinators for procrastinators. So here are three of my favorites. Enjoy.

Don’t Panic: The Procrastinator’s Guide to Writing an Effective Term Paper (You Know Who You Are) by Steve Posusta

I wish I had had Steve Posusta’s book when I went to college because he has a simple system for writing a term paper at the last minute.

What’s the system? A basic outline that works.

Many copywriters use the outline I use for writing content. You start with a problem. In the middle you describe the solution to the problem. Finally, you end with the results and a call to action.

Using an outline is not formulaic. As Posusta points out, you still have to do the work to develop your content. And no two articles will ever be the same if you have thoroughly thought about your topic.

But having an outline is a key ingredient to taking the panic out of having to write content at any time.

The Art of Procrastination: A Guide to Effective Dawdling, Lollygagging and Postponing by John Perry

Stanford philosophy professor John Perry is an incorrigible procrastinator. Instead of beating himself up about it, though, he’s developed “structured procrastination” to get more done.

For example, if you have to write a blog post that’s due tomorrow morning at 8 AM, put it at the bottom of your to-do pile. Then put writing the great American novel at the top. You will most likely put off writing the novel by distracting yourself with writing the blog post.

Perry also introduces the concept of “triage,” which comes in handy when you’re up against a deadline with too much to do. At that moment you have to ask yourself, are all those to-dos really necessary? If not, then get rid of the unimportant details to focus on the most important tasks. And the next time you start planning a writing project, you’ll ask yourself this question before you begin writing.

How I Stopped Procrastinating by Merrill Markoe

In January 2014, How I Stopped Procrastinating by comedian and writer Merrill Markoe caught my eye.

How did she overcome her problem with procrastination? She, unfortunately, became an invalid.
Waiting for and recovering from hip replacement surgery forced her to make a change in her daily routine. So she decided to write at 6 AM when she had nothing better to do.

Now writing first thing in the morning is a joyful habit.

What Can You Do About Procrastination?

We have a lot of time–168 hours every week. It’s just we fill it all up. And it’s hard to remain aware how we do that.

So it’s a good idea to find ways to minimize procrastination: have a plan, establish deadlines, create new routines, triage when necessary, and have a sense of humor while staying focused on doing your best for the people who matter.

I've been creating web content since the web was the next big thing. When not working, I like looking at art or hiking with my husband in the open spaces in San Diego and beyond.